July 06, 2020
I've mooched today. A day off. I've got my period so generally feeling quite blarg. Nonetheless, I have eaten food, and mooched.
I see the UK government has apparently offered up £1.57B to be fought over in the arts. The radical move here would be to grant all "disabled or trans or brown or female"-led arts organisations with three years of operating funds and an endowment. And also to identify and support the ecosystem of organisations underpinning their success, and support them too. I wonder if there's an arts equivalent of the Small Business Grants that we were eligible for and didn't need to apply to receive. Or perhaps you go from the opposite direction to find organisations that don't need grants because they already have endowments or assets over a certain size or turnover above a certain amount (or a combination thereof). For example, did you know the British Museum "holds highly liquid assets amounting to £26 million as at 31 March 2019"? Let's say there are about 1,300 theatres in the UK, and 2,500 museums... That's 3,800 orgs. That's about £400k each. That's another way to do it. If we're going to be left-y fascists, why not throw in some communism. Or is this disestablishment?
You may be surprised (after that) to know on my day off I started bell hooks' All About Love: New Visions, published 2001. The more I learn about hooks' work, the more I realise she's been working on what the world needs now for her entire career. I'm enjoying it. This lockdown has been a phase of really fucking leaning into the practice of beginner's mind. 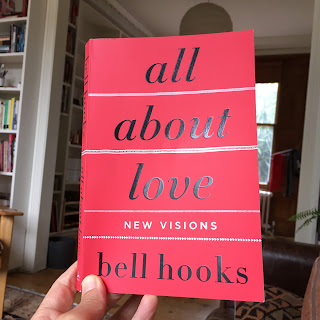 Here are the bits I've taken note of so far:

To truly love we must learn to mix various ingredients - care, affection, recognition, respect, commitment, and trust, as well as honest and open communication. p5
Understand love ‘as the will to extend one’s self for the purpose of nurturing one’s own or another’s spiritual growth’. p10
To begin by always thinking of love as an action rather than a feeling is one way in which anyone using the word in this manner assumes accountability and responsibility. p13

After reading a few chapters I had a late lunch and I caught up on two episodes of the masterful and uncomfortable I MAY DESTROY YOU, written and created by Michaela Coel. It makes me feel impressed and old and worried and stunned and excited all at once. Vulture Magazine is writing a lot about the show, including episode-by-episode recaps, like Eyes Eyes Eyes Eyes, and this recent feature on Coel herself (which I stumbled on through New York Magazine's One Great Story, by the way). If you haven't watched it you may not be alive? She's everywhere and it's excellent even though the story is tough as hell or perhaps because of it.
I snuck in a viewing of Becoming, the documentary about Michelle Obama's new book of the same name. Bloody hell, she's amazing.
I haven't read the book yet. Some interesting stuff there about disembodiment when you become that important. And also, can I just say how much I miss the warmth demonstrated by the Obama family?
WHAT THE WORLD NEEDS NOW IS LOVE. GOT IT?
I have some at my place, as my blogging helper can demonstrate: 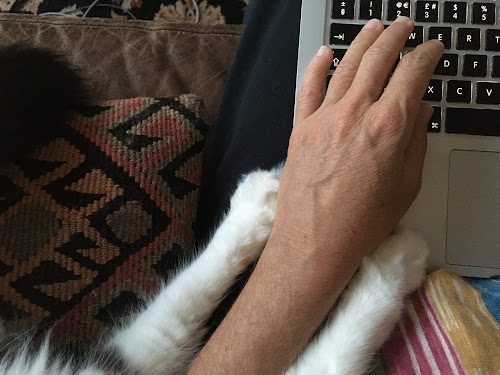