July 08, 2020
Oof. It's late. I'm tired. The great news is I finally planted my tomatoes to replace the Jasmine of Doom, and got a rando FaceTime from dear Eliza in California!!! 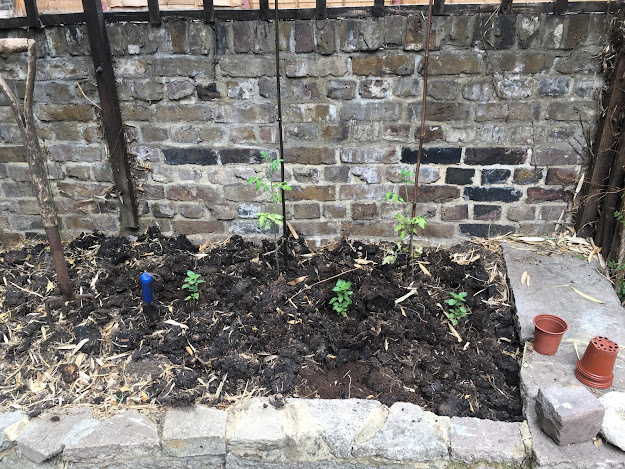 Today I haven't been able to stop thinking of something that struck me when I first moved to the UK. One day, when I was exploring, I happened to have a coffee with Ed Vaizey, thanks to my friend Wolfgang. He was very pleasant. I was not at all prepared as well as I should have been, and nothing came of it, which is one of my few regrets. But, the thing I noticed and remember most was that Mr. Vaizey's shirt collar was frayed. How strange, I thought, that the Minster for Digital and Creative Industries couldn't afford a shirt that wasn't frayed. I mean, he has his own coat of arms.
I remember mentioning this to a new English friend who informed me that this was an ever so subtle class marker. That upper class people like to wear things out instead of buying new replacements. Very very wealthy people don't have much actual cash, since all their wealth is tied up in things that are difficult to extract their wealth from, like a big house, or, say, most of the real estate in Bloomsbury, as is the case with the British Museum, whose total net assets were listed as £1,001,693,000 in its 2018/19 Annual Report on the Consolidated Balance Sheet, as at 31 March 2019. How hard it must be to see all that money listed as a line item in a balance sheet and not be able to use it.
I've been thinking about that £1,570,000,000 cash injection offered by the government to the arts sector, and trying to think about Who Needs It The Least? It's early days for my data gathering and poking, sadly, and the decisions have likely already been made about who is going to benefit although I understand there will be some form of application for some.
Today I learned that the Department of Culture, Media and Sport (DCMS) gives funds each year to what's called "Arm's Length Bodies" which receive what's called "Grant in Aid". I found a DCMS Estimate Memorandum containing a certain Table 3: Comparing the Grant in Aid funding of our Arm’s length bodies in 2016-17 through to 2018-19, which I share with you below:
Isn't that interesting? That is a bunch of support. What robust affirmative action! A total of £4,613,219,000 projected to be granted to these 30 "arm's length" organisations in 2018. More like "at the breast" organisations, amirite?!? Oh, and look: There's the British Museum up there in the list, which was projected to receive £42,046,000 in 2018. The BM's annual report (linked above) confirms for us that indeed "The British Museum received £39.4 million revenue and £13.1 million capital grant-in-aid from the DCMS in 2018/19" on page 16. All 30 organisations who receive this Grant in Aid are required to sign a Management Agreement with DCMS, and report back in a standard way so DCMS can see how well the grants are being used and measure performance consistently. For example, here is the Total income of DCMS-funded cultural organisations 2018/19 report from DCMS.
The government's support package announced this week to be spread across lots more organisations is about 34.03% of that total annual grant in aid dispensed in 2018. I hope my maths is correct, otherwise I'm going to look even more naive and foolish. I am very willing to be called out on this naivety so I can learn more, but I have tried to not make mistakes.
I am definitely glad to see that the cultural sector has been recognised as having value and need for support. This is unequivocally good. The very early point I am trying to make is that there might be a way to look past and around and through the giant nationals with the loudest voices and ongoing DCMS support in the millions and with vast assets (many of whom as speaking to us via that 5 July government press release to say how happy they are) to see if it's possible, finally, to illuminate the smaller players, the dynamic and struggling groups, the covens of freelance talent, the support companies, and basically everyone else who isn't one of the biggies.
I chatted about this with a few arts-related friends, and Clare directed me to a report called The Art of Dying written in 2005 by John Knell, which I basically hope everyone who's dispensing funds has studied and can recite. It's a response to a conference held the year before, where these three main insights were born:
I really what Mr. Knell is writing here. It's important to be able to look at each other and agree that an organisation with £1,001,693,000 worth of assets is stable. Or bloody well should be.
So interesting.
Then the question becomes Who Needs It The Most? And I shall look forward to jabbing both of these cans of worms a bit more. And, comments are very welcome on this (maybe on the tweet of this post?). I know I'm naive. But hey, that's a good thing sometimes. I hope you all know I'd consider myself to be a true friend to all museums everywhere, but I have to admit I particularly love the small ones that are super fucked, and definitely don't have £1,001,693,000 hiding away in real estate or other investments that are difficult to access because there's some form of governance in the way of deciding to release them.
Thanks to Fiona for encouraging me to change the question from who needs it least to who needs it most. Although that's a much harder question!