July 23, 2020
Day 122 was just a blip.
I made the best salad in the universe for breakfast this morning. I peeled, deseeded and chopped the cucumber I picked yesterday, halved about a dozen cherry tomatoes, added pepper and salt and a plug of olive oil. Then, and this is the most important step, I went away and watered the garden and faffed about for half an hour. There is alchemy here. The salad sits in itself and gets better. the veg release juice that is SO DELICIOUS you can't even imagine. Then I chopped up some of the rosemary sourdough I got at the market yesterday, and added a little parsley and basil from my tiny veggie patch. YUM. The juice got soaked into the bread and every bite was a delight. 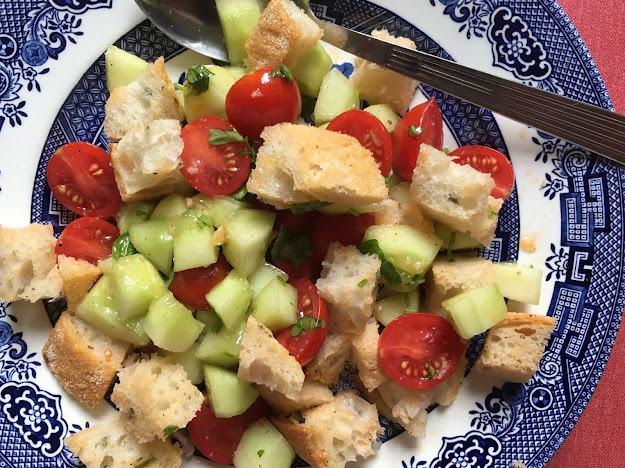 I spent the morning finishing Beloved by Toni Morrison. I enjoyed it very much. Listening to the stories of various intertwined enslaved people and their struggle, love, pain, joy, torture and even death. Because it was an audio book, I'd find myself tuning in and out and back again, and especially wrenched back by something frightening or brutal or beautiful. I found the whole work an odd mix of banality of evil and poetical expression. Morrison's turn of phrase is magic. Talking of the sounds  women whisper to their tasks, for example, the noise she makes if she pricks her finger.
An interesting email popped up today from a Goliath wanting to see if I'd be interested to respond to a big piece of work they'd like. I am a gnat called David compared to this beast. It'd be the best kind of interesting, but I wonder if there might be a few too many orders of magnitude difference. Am asking some clever friends. Considering a radical proposal.
I was basically waiting until 3pm, when I had an appointment with my neighbour, Faye. She has a plot at a secret allotment nearby and offered to take me there. Today. She's from Edinburgh I think, and a lot older. Married. She came on time. I'd been sitting in the sun for ten minutes on my neighbour's steps for a short bake. It was a lovely day today. And off we went. Nice to chat to someone new. One of her first questions was well do you have a job otherwise why are you doing hanging out with me on a thursday afternoon etc, and so I laid out what's been going on. She was sympathetic after the common reaction of ooh, won't the Boxes sell like hot cakes? It's understandable, but, I couldn't do it. The secret garden was fab. Apparently I could get a key but not a plot for £10/year. It's a happy spot. I'll think about it. I want to wait and see if my little backyard patch works out before I get another one. There are seeds coming up and I gave the tomatoes a bit more support today, so I'm hopeful, even though I left it a bit late.
Since I saw it fly by, I'd wanted to watch a chat between the Librarian of Congress, Carla Hayden, and the Secretary of the Smithsonian Institution, Lonnie Bunch. After I'd thanked Faye for the wander with a Magnum (which she enjoyed every much! (she went with Almond, I chose Mint), I settled in to listen to the two giants of the library and museum scene in the USA having a chat on the 5th of June about Cultural Institutions at Times of Social Unrest. It's 30 minutes. They're both brilliant people in charge of a lot, and worth listening to.
Then, of course, I wandered around the Library of Congress on YouTube, and they've been publishing a ton of great stuff recently (as usual), but definitely featuring more Black Lives stories and interviews. I saw a couple of National Book Festival chats like "Hear You, Hear Me": Race in America: Colson Whitehead and Jill Lepore on How This Pandemic Will Go Down in History. I was surprised to have a celebration of the acquisition of the papers of the majestic and witty soprano suggested by the website, but happily watched A Conversation with Jessye Norman, also interviewed by Dr. Hayden. (What a perk! To get to meet all these people.)
Here are the things I scrawled on a bit of paper as I was absorbing all this:
Now I'm watching a video oral history interview of the family of activist, Bob Hicks: Civil Rights History Project - Hicks family oral history interview in Bogalusa, LA, 2011 May 27. It's fucking sad and stressful. Horror. The family is patiently and painfully telling the story of what their lives were like in the 60s in Bogalusa, Louisiana in the middle of the Civil Rights movement. It's Klansmen with cop uniforms underneath stuff.

"There were two or three types of fear that existed in our community: something was going to happen to you physically; or, psychological, which was more draining. Nobody likes pain, but I think the psychological fear of having to go through this every day was an enormous stress. We never knew when Dad went to work if he was going to come back. We knew they wanted to kill him. They built a coffin and put it on Columbia Road."  - Mr. Hicks' son

The other best thing on the internet today was watching Alexandria Ocasio-Cortez say FUCK OFF to all the men who hide themselves from blame for sexism by proclaiming they have daughters or wives or mothers or any woman in their life, like a Florida Republican called Yoho did.
Almost forgot the most random thing that's happened since I started this, maybe? When I got home from Faye's allotment tour, the winner of the Big Flower Fight was sitting on the neighbour's steps, where I'd sunned myself not hours before, being photographed for something. The little crew were very nice.