July 24, 2020
Had a little cry today. I had to go to the office for the first time in over 125 days and the fact that we're going into hibernation hit home. All at once. I spose it had been easy to stay mellow about it from my couch at home, but going there and seeing what we'd built it just struck me all at once. I like work and I like the office and all the things and all that. Sanjay the office manager came by and I was in tears and I tried to chat and did a bit and he was nice and I breathed and chatted and then it was OK. I'll be at the office all next week packing up and selling what we can. We're out on the 31st. (It'll be good. This is a hard bit.)
After that, the day was a steady A+. Met Lou for lunch at Sông Quê Café. Basically order most of the starters, and most of them were FRIED and it was FANTASTIC.
Then we popped to the pub and had a shandy in the sun. I headed home then Bex called and said do you want to go to the pub and before I knew it I was off again to another pub. They were doing MARGARITAS, so I leapt at that. They had CHIPS! And I even got a PORK PIE for some reason. 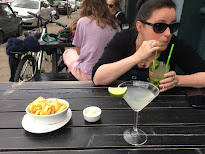 I apologised to Bex for all the photography. You have to make the story as you go in a day otherwise it's boring, or I'm just writing down the media I consumed.
I had to dart off at 19:16 for a THEATRE SHOW at 19:30 which I was a tad late for but that was OK because you had to get there via a Google doc and then sit in a Zoom with instructions in it until the show started. I like the time before the show starts when you're in your seats at the theatre. That hubbub is divinely human. This show didn't have that, but, I enjoyed it. It was a work called The Conversation based on a book written in 1927 on how to have a conversation. Part of the Electric Dreams Festival which is three weeks of stretching into isolated but immersive art and theatre on the internet. I met the nice chap running it last weekend and had a chat about applause. (Mark.) 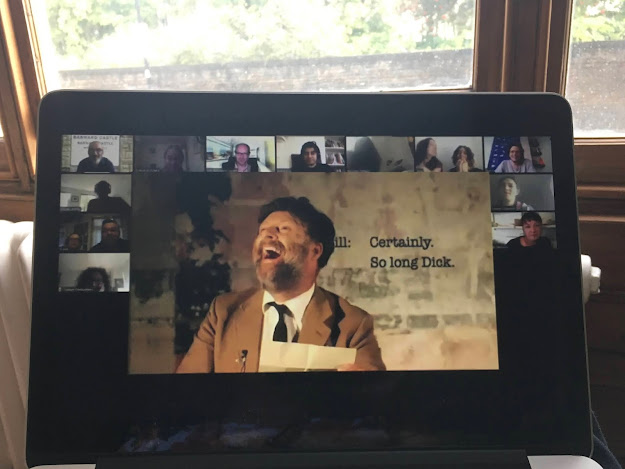 I'll definitely go to a few more things, I reckon. It was good to get a culture dose after gazing up my own a**hole for so long. Now I'm here again by myself and it's really getting pretty boring again now, even though I'm certain I'm interesting.