I saw Narcissus the other day, Day 141. He was at the beach with a gang of his pals, in Broadstairs. They were about fifteen, I reckon. He was a beautiful boy, if a bit short. Nice torso. I noticed he brushed his hair once they returned from a swim. Like a rockabilly. He brushed it for almost a minute. I've never seen that before.

He was clearly leader of the gang. He teased the others, and was occasionally quite mean, following up with a 'just joking' escape. Three of the boys, Narcissus included, had one of those manly (silver) chain necklaces. I was snoozing and swum and had beer. They came and went from their spot, which was about 15 feet in front of me. At one point, I looked up and he had a giant pair of shades on, obviously selected for their Coolness. One of the gang had to (or chose to?) stay behind when the gang went for a wander. He looked a bit pissed off, but that might just be teenage.

I've spent the last two days exploring some recommended beaches in Kent. Not bad. Lots of rocks. Here are my knees in one of the locations - a rare sandy beach. I have a larger knees series. 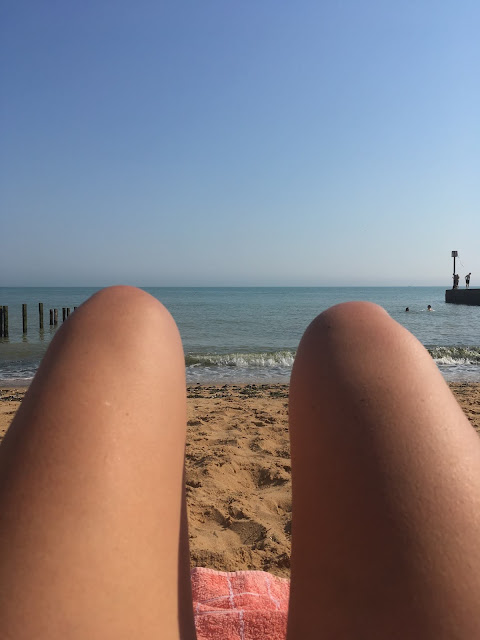 When I was young, in addition to swimming a lot, I also threw things a lot: tennis balls, rocks, cricket balls, softballs, javelins, discuses, shot puts. You name it, I'd throw it. I used to play in the park across the road at Northgate Street just throwing a tennis ball as high as I could in the air. Or at Myponga Beach, where I'd throw rock after rock after rock trying to hit telephone wires. I used to field at fine leg in cricket and I was very good and accurate at returning the ball over the stumps. That was in a boys' team in primary school. I tried to play in the boys' team in high school but was too intimidated. I made up for that by holding the javelin record four years in a row. (I wonder if that's been broken.) Anyway, yesterday, at Deal, there was about 50 billion pebbles on the beach, and a target out in the water, and I couldn't resist trying to hit it. Mink shot a film of it.

By the way, parking palaver is sorted. A nice lady from the council with a husky voice called Michelle called and said she's going to fix it all. I have no written receipt of this.