Happy Saturday! That's 21 weeks now. Here's my breakfast, and tomatoes from the allotment, parsley from my little garden. 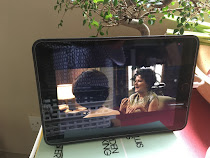 I got half way through Hannah Arendt (The Movie) before I headed out for the day's adventures. I enjoy her philosophy, and the movie was about her creation of the idea of the banality of evil during her work to report on and write about the trial of Adolph Eichmann in Jerusalem in 1961. He was hanged in 1962.

I think I've been to Epping Forest once or twice before. It's an ancient forest, just on the border of Essex and London, and I drove there today with Lou. We'd originally hoped to get to a beach but the weather's gone wet so it didn't seem as fun. We grabbed a cheeky Costa at the Shell in there, and a croissant, and landed at Car Park 41. There was a slightly unsettling sign at the entrance, next to the 'don't pick the fungi' request. 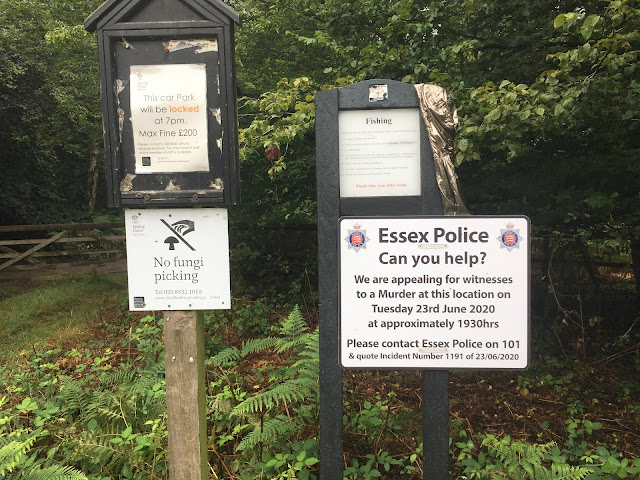 After a creepy feeling of slight hesitation, I immediately suggested going off piste. The forest was lovely. The smell of the wet leaves and bracken and tress and earth was wonderful and refreshing. You could just tell that the plants were drinking it in, and we both commented on how oxygen-y it felt. We made lots of observations of potential clues that may have been missed by the constabulary and CSI.

After about half an hour, the forest began to look very similar to itself. We stopped to eat our croissants. It wasn't long before we had absolutely no idea which direction we were facing, or which way the car was. What a great place to bring control freaks for a team building day, we joked. Ooh, is that a bog? Why do people litter in a place like this?! 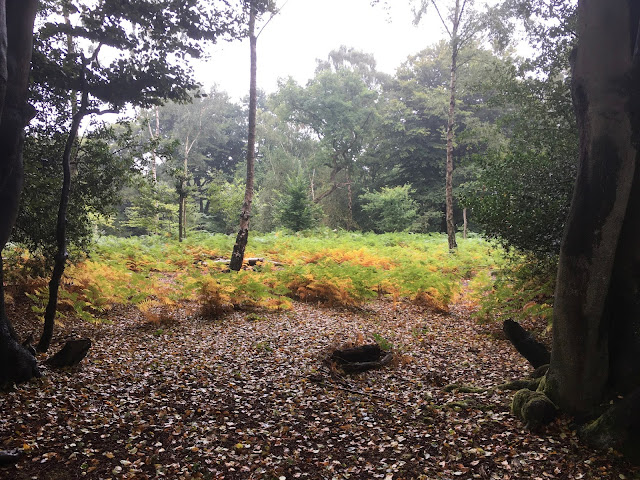 We walked for about two hours. Both comfortable to follow the other, or suggest which way we thought we should go now. We had absolutely no idea which was the right direction, and the grey sky didn't help. Luckily, all of England is basically a big garden, so I never felt nervous. But eventually, the lack of direction got boring, so we finally looked at our phones and found we were about 15 minutes away from the car, somehow.

Hunger directed us towards lunch, and Lou found a pub right in the middle of the park. YES! Got there, and, they'd had a power cut, and were completely flabbergasted about what to do, and said they couldn't help us. We moved on to another one (which I'll definitely return to), but the lady behind the bar told us there's absolutely no way we can serve you any food for AT LEAST AN HOUR but could get you a drink and some crisps because you haven't booked and we're completely booked for eternity. We got a drink and some crisps and Lou mentioned that actually an hour wait is relatively normal at a pub on a Saturday, but still. Went past a third on the way to a birthday picnic and thought to return there also at some stage, maybe after having a picnic we could arrange ourselves?

Then met friends at Ella's birthday picnic and that was lovely, to talk with new folks and friends who came together from all over. I rocked up empty handed about three minutes before the party's invite time was coming to a close, so I read Ella my Day 9 story about looking after her place.

Now, there's a cat on my lap, stretching occasionally into and onto the keyboard -- he's right in the middle, and I have to move his paw to write G and H and B and I think he likes it a bit. I'm watching an excellent documentary about a photographer called Finding Vivian Maier.  Her photos are wonderful. Her character prevented her from sharing her work. It was found later.