Everything's fine. I'm not fat or bored anymore. Fat swings and boredom roundabouts, eh? I mean, I am probably eating too many biscuits, but the real question is too many biscuits for what/when/who?

I've been the opposite of bored because I decided to attend a conference that happened last year: EYEO 2019. It's a great meeting, and has been going on since 2011, and there are 400 talks for you to watch on Vimeo. I've never been, but I know several people who fly in my circles who have. I must say, 2019 has one of the most inclusive, queer and amazing speaker lineups I've ever encountered and I'm so glad for it. Every talk or shorter Ignite presentation I've seen so far has been excellent.

Here are the notes I have hastily pecked as I try to focus my attention on listening:

Themes so far include: benefits of being patient; examining borders and their control structures; no such thing as one story; for me: technological prowess at scale is not interesting. It's like those scandi strongmen you see dragging cars with their teeth, and you just know that's what they do all day. This kind of success is unsophisticated. I'm so interested in the types of critique of success and boundaries coming out of these talks. We want dark corners and complexity, and compassion requires detail, I think.
I also watched Cathy O'Neil give an author talk at Google in 2016. (She wrote Weapon of Math Destruction.) She talks usefully about how algorithms can be misdirected and encoded with bias, even unwittingly. I was entertained by the bluntness of the Q&A, from both sides (which starts at about 33 mins), and in particular, this question, asked by a male engineer who is just trying to do his good job (?):

“if i try to not incorporate existing structural biases into the algorithm, how do i deal with the challenge that I’m optimising away from success conditions?”

“if i try to not incorporate existing structural biases into the algorithm, how do i deal with the challenge that I’m optimising away from success conditions?”

O'Neil's answer was to make a good, new, iterative model based on specific contexts. Not to borrow these old, worn, outdated massive datasets you can grab on the internet to train your model on their past patterns to shape what the algorithm strives for as success.
And I am also reminded of one of my very favourite maps, Harold Fisk's Alluvial Valley of the Mississippi (displayed by Radical Cartography in full). These wonders are the best thing I saw on the internet today, and the first time, which was probably when I was at Stamen, maps, maps, more maps. 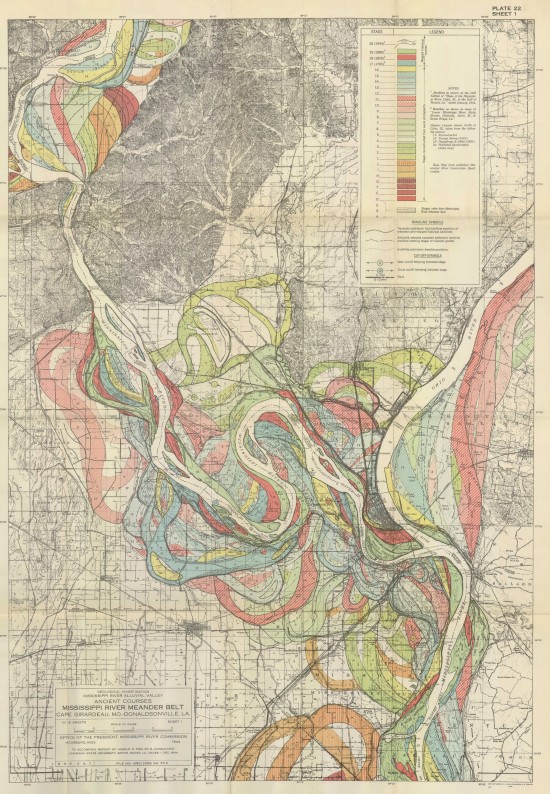 Thoroughly re-engaged intellectually. At least until I've finished all the conference talks.